Biography
William Menzies Gibb was born in Innellan, Scotland, in 1859,
the son of the painter John Gibb. He was aged 17 when he
arrived in the Canterbury port of Lyttelton with his parents in
1876. His early art training was with his father but in 1880-
1881 he went on to study at the National Gallery School in
Melbourne. He also exhibited at the Melbourne International
Exhibition of 1880-1881 and the Centennial Exhibition,
Melbourne, in 1888-1889.
In 1881, while he was still in Melbourne, Gibb had painted a
portrait of Sir Julius Vogel who had been Prime Minister of New
Zealand during the 1870s.When he returned to Christchurch, in
1882, he first established himself as a portrait painter but later
specialised in landscapes. Gibb exhibited at the first Canterbury
Society of Arts exhibition in 1881 and continued to be actively
involved on the council of the Society throughout his career,
including serving as President in 1916. He exhibited at the
International Exhibition in Christchurch in 1882 and in the
Indian and Colonial Exhibition in London in 1886.
Gibb was a member of Christchurchs Palette Club, which was
formed in 1890 to encourage plein air painting and in reaction
to the more conservative and traditional styles favoured by
the Canterbury Society of Arts. As well, the Palette Club
provided an alternative exhibition forum to that of the CSA. In
1905 Gibb also became a member of the Christchurch Artists
Sketch Club, a group of artists who gathered in Sydney Lough
Thompsons (1877-1973) studio in Cambridge Terrace.
Gibb travelled to Britain in 1910 and there visited St Ives,
Glasgow, France and other areas of Europe, bringing back
many fine examples of his work that found a ready sale in
New Zealand. He held a large retrospective exhibition at the
Canterbury Society of Arts in 1927, the first exhibition at the
Society devoted to the work of just one artist. He also
exhibited at the Imperial Art Exhibition in London in 1928.
Gibb died in Christchurch in 1931.
Throughout much of his early career Gibb worked in an
Academic manner, working up in his studio sketches and studies
made out of doors. In his studio more detailed and highly
finished works could be completed. However, he also favoured
painting directly from nature, particularly when working in
watercolours. His paintings were very popular in the late 19th
and early 20th centuries because of their representation of the
New Zealand landscape in its happiest moods. 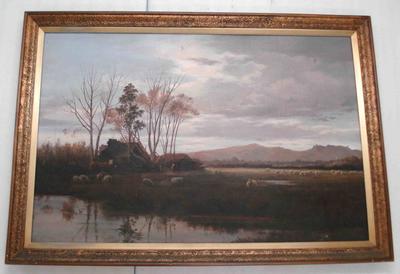 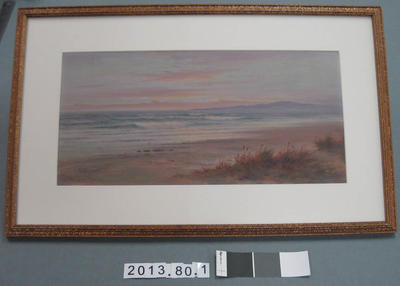 Painting: Sunrise over north New Brighton Beach with Banks Peninsula in the background.; 1930; 2013.80.1 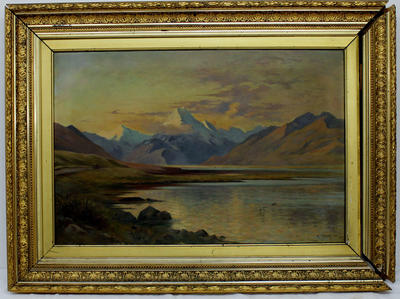