Biography
From the Dictionary of New Zealand Biography

Benjamin Woolfield Mountfort was born on 13 March 1825, according to family information, and was baptised at Birmingham, England, on 1 September 1825. He was the eldest child of Thomas Mountfort and his wife, Susanna Wale Woolfield. Benjamin grew up in Birmingham, where his father was a perfumer and manufacturing jeweller, and in 1844 was articled to the architect Richard Cromwell Carpenter, of London. Carpenter was an influential Gothic Revival church architect, and a member of the Cambridge Camden Society (later the Ecclesiological Society), for which he produced a series of model designs. Benjamin Mountfort's lifelong devotion to the Gothic style and his adherence to ecclesiological principles are directly attributable to his training with Carpenter. By 1848 he was practising on his own account in London.

On 20 August 1850 Mountfort married Emily Elizabeth Newman at St Luke's Church, Chelsea; the seven children of the marriage were all born in New Zealand. The Mountforts were members of the first group of Canterbury Association settlers, arriving in Lyttelton aboard the Charlotte Jane on 16 December 1850.

Mountfort's architectural career effectively began on his arrival in New Zealand. His first major commission resulted in the ambitious design for the Church of the Most Holy Trinity, Lyttelton (1853). Inadequately seasoned timber was used in the church's construction, and after it had been repeatedly buffeted by high winds it was declared unsafe and demolished in 1857. This failure, attributed by ungenerous contemporaries to the architect's incompetence, occurred rather because Mountfort had insufficient experience of local conditions. He ran a bookshop and worked as a drawing teacher and portrait photographer between 1857 and 1859, but continued to design churches, including St Bartholomew's, Kaiapoi (1855) and St Mary's, Halswell (1863). St Mary's was a small parish church, Gothic in style, picturesque in composition, and constructed from timber with vertical board and batten sidings. It was of significance as it became the model for Mountfort's subsequent designs for timber churches. Many such churches were erected throughout the Christchurch diocese and further afield during the next 30 years.

By 1857 Mountfort was in partnership with his brother-in-law, Isaac Luck, and in that year they became architects to the province of Canterbury. They were responsible for the design of the Canterbury Provincial Council Buildings in Christchurch, erected in three stages between 1858 and 1865. The stone council chamber (1865) was the outstanding achievement of Mountfort's career, and is the earliest as well as the finest example of High Victorian Gothic architecture in New Zealand. The partnership with Luck ended in 1864 and Mountfort immediately formed a new partnership with Maxwell Bury. This was in turn dissolved in 1866 when Bury left for England, and for the remainder of his career Mountfort worked on his own.

Mountfort was involved in controversy in 1863 and 1864 when the construction of Christchurch Cathedral was about to start. The cathedral's architect, George Gilbert Scott, was asked to recommend a supervising architect. Mountfort offered his services and Scott approved of his appointment, but the Cathedral Commission insisted that an architect be sent from England. This prompted vigorous protests from local architects. Work on the cathedral began under the supervision of Robert Speechly but was suspended for lack of funds in 1865. When construction resumed in 1873, Mountfort was appointed supervising architect, a position he retained for the rest of his career. He was responsible for several significant modifications to the cathedral's design, most notably to the tower and spire.

Increased building activity in Christchurch during the 1870s brought Mountfort further important commissions. His designs for the Canterbury Museum, built in stages between 1869 and 1882, and for Canterbury College, including the Clock-tower block (1877) and Great Hall (1882), provided Christchurch with a group of Gothic Revival public buildings unrivalled elsewhere in the country. These buildings reveal Mountfort's awareness of new developments in British architecture and also his individuality as a designer. His ecclesiastical work during this decade included the richly embellished chancel of Holy Trinity Church, Avonside (1876), the large timber church of St Paul's, Papanui (1877), and Trinity Congregational Church (1874), an aggressively muscular stone church on a compact city site.

By the 1880s Mountfort was recognised as New Zealand's foremost church architect. Consequently he received commissions from all over the country to design new churches and additions to church buildings. The Church of the Good Shepherd, Phillipstown, in Christchurch (1884), the first church in which he used brick as the principal material, provided a model for St John's Cathedral, Napier (1888), the largest church that he designed. The largest and most impressive of his timber churches, St Mary's, Parnell, Auckland, which was built in stages between 1887 and 1898, marks the culmination of his practice as an ecclesiastical architect.

Throughout his working life Mountfort demonstrated exemplary professional standards and when, in 1872, the Canterbury Association of Architects was formed (the first professional organisation of its type in the country), he was elected president. Mountfort was a devout member of the Church of England, and was regarded as the leading lay member of the High Church movement in Canterbury. Small in stature and retiring by nature, he was a man of simple, unaffected manners, who was held in high esteem by his contemporaries. He died on 15 March 1898 at Christchurch and was buried in the graveyard of Holy Trinity Church, Avonside. The belfry of the Church of the Good Shepherd, Phillipstown, was erected in his memory.

Mountfort's buildings played a major part in establishing the architectural character of Christchurch and gave permanent visual expression to the social and religious ideals of the Canterbury Association. Among New Zealand architects of the nineteenth century few can equal his dedication to his profession, and none can surpass the standards of design he maintained during a career of 50 years. 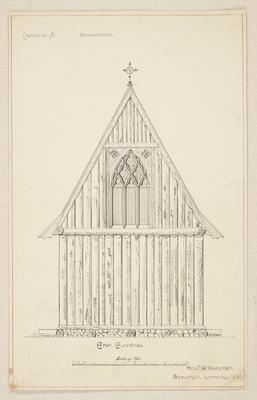 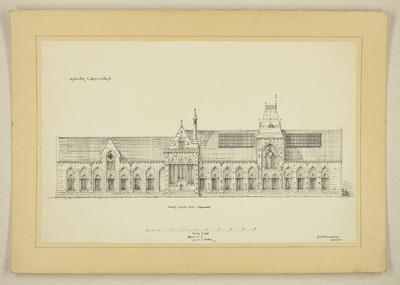 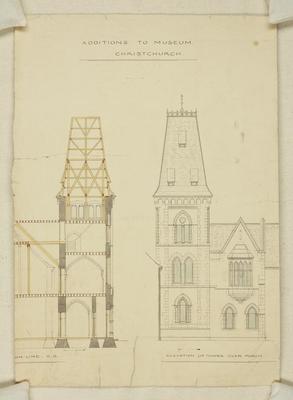 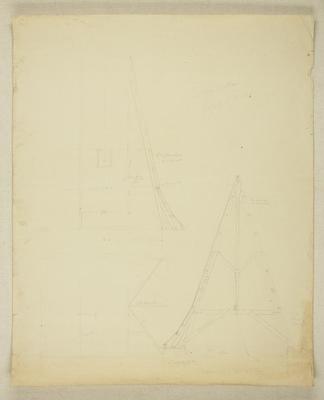 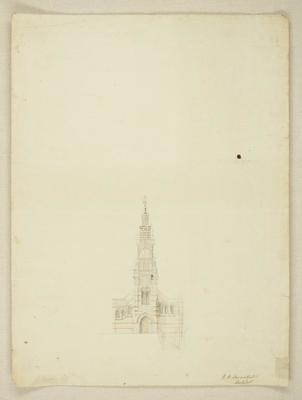 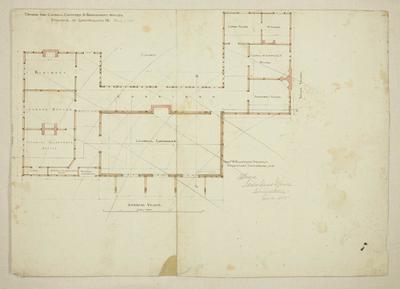 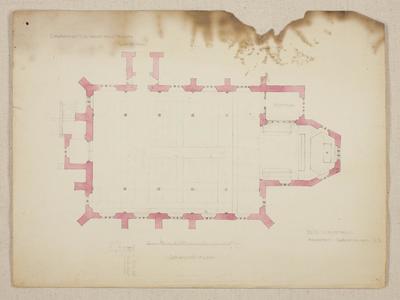 Mountfort Architectural Plan: Church of the Most Holy Trinity, Lyttelton, 1856; Circa 1856; 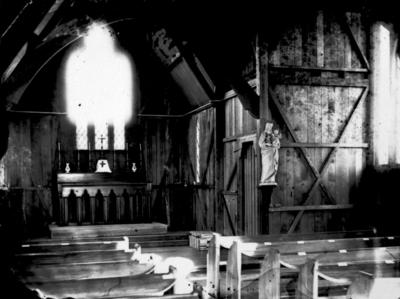 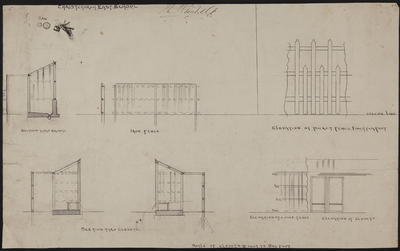 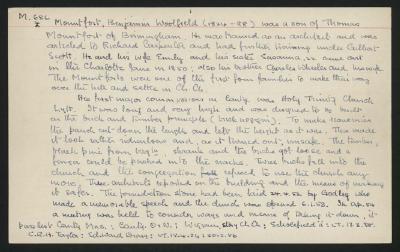 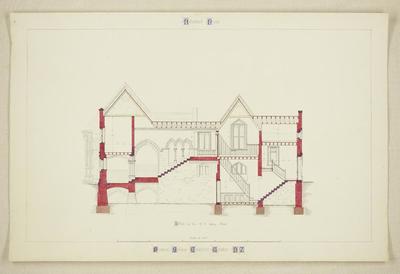 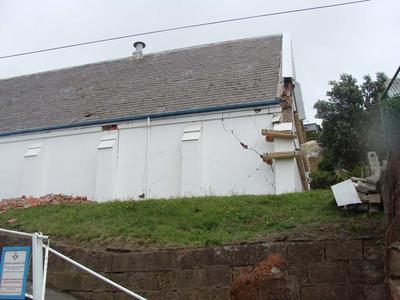 Digital Photograph: Earthquake Damage to the Lodge of Unanimity No 3, at the intersection of St Davids Street and Sumner Road, Lyttelton; 25 Feb 2011; 2013.17.30