Biography
Kensington Works
Established by Wilkinson & Rickuss in about 1856, who were succeeded in 1862 by Wilkinson & Son, and next by Bailey & Bevington.
Mr Bailey having retired in 1872, the works were carried on by John Bevington, who produced ordinary earthenware, ornamental china, Parian and stoneware - the speciality being imitation Dresden for home, United States and Australian markets.
In the 1880's. John Bevington advertised 'Reproductions of the Old Dresden, Derby, Chelsea, and Worcester patterns, in figures, vases, candelabra (1,2,3,4 & 5 lights) baskets, etc.'
John Bevington continued at the Kensington Works until his death in 1892.
(Jewitt's Ceramic Art of Great Britain 1800-1900) 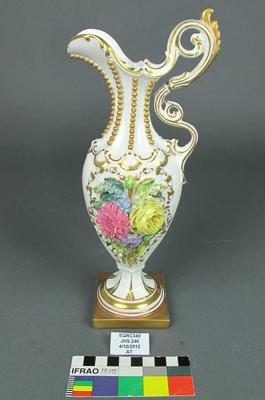