Date of birth
Date of death
Place of birth
Leeds/England

Biography
Wilcock & Co was started by William Wilcock and John Lassey in 1842. The men, who were 18 and 20 at the time, acquired 100 acres of land and started to make santiary wares and chinmey potts under the name Lassey and Wilcock. John Lassey died in 1858 leaving the business to his widow Margaret. Margaret held onto the business for five years before selling her share to John Holroyd, owner of Carlton Mills in Woodhouse. William Wilcock died in 1877. By 1882 the business had been renamed Burmantofts and switched to producing decorative pottery.

John Holroyd's son, James, took over the business around the time of the third name change. James' interest in architecture led to the production of decorative tiles and Burmantofts quickly rose to become a rival from many major potteries, including Doulton. The tiles were known at Burmantofts Faience. Styles ranged from gothic, and oriental to Anglo-Persian.

Falling sales led to the closure of the art pottery department in 1904. The company changed its name to Leeds Fireclay Ltd. The market for extravanagant buildings declines after the World War Two and bombed out buildings were replaced with cheaper brick buildings. The company folded in 1957 and by the 1960s the land and remaining equipment had been sold off to make way for a primary school and a housing development. 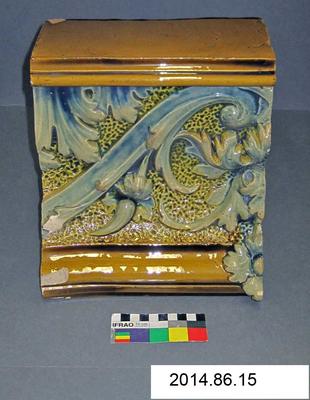