Biography
Born in Belgium but spent his early years in Tasmania. Spent two years at the Melbourne Observatory, took part in the Southern Cross Expedition of 1898-1900 during which he served as a magnetic and meteorogical observer. Author of papers on the meterological and magnetic work of the expedition and on the topography of South Victoria Land, published in the Geographical Journal; also a narrative of the expedition entitled "To the South Polar Regions" (London 1901). Joined Discovery in New Zealand as a Physicist and Magnetic Observer. The physical and magnetic observations made in the expedition were published by the Royal Society in 1908 and 1909, as part of the scientific results. In 1925 he planned to lead an Antarctic expedition which never materialised, and in 1930 he organised the British Polar Exhibition and he helped to organise the Second International Polar Year 1931-32. In 1933 he published the life of L.E.G. Oats, a member of Scott's last expedition under the title "A Very Gallant Gentleman", and the "Saga of Discovery" in 1938. 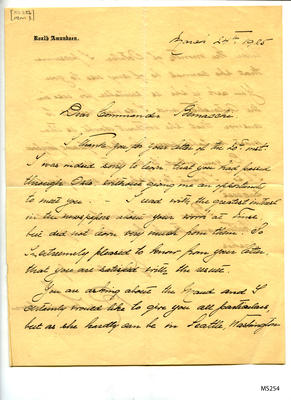