Biography
Henderson was born and educated in Nelson. He grew up on a sheepfarm called Kairuru on Takaka Hill. He served as a gunner in the 2nd NZEF artillery from 1939 to 1943 in Fiji, Egypt and Libya where he severely wounded and spent two years as an Italian prisoner of war. He lost his leg during the war. After the war he was a reporter for the "Nelson Evening Mail" and "NZ Free Lance" and then spent some time as an official war historian employed by Internal Affairs. He was a member of the 1960-61 "One Foot at the Pole" expedition, where he was believed to be the first man to go to the South Pole wearing an artificial leg. He then joined the NZBC as a documentary specialist but is best known for his programme "Open Country", which began in 1961 and continued for 14 years. He has written and edited a number of books, among them; "Gunner Inglorious", which recalls his war experiences; several war histories; six anthologies based on "Open Country"; "Open Foot at the Pole" which decribed his trip to the Antarctic; "New Zealand's South Island in Colour", and his autobiography "Down from Marble Mountain". 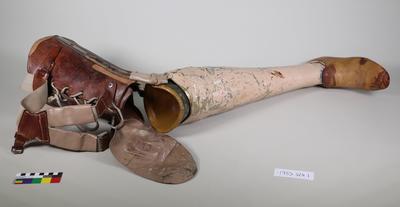